Diversity Spotlight Thursday is a weekly meme hosted by Aimal @ Bookshelves & Paperbacks. Every week, you come up with one book in each of three different categories: A diverse book you have read and enjoyed, a diverse book on your TBR, and one that has not yet been released. Check out the announcement post for more information. 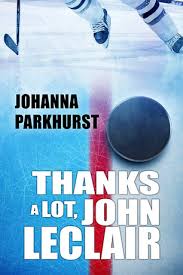 Thanks a Lot, John LeClair by Johanna Parkhurst

Sixteen-year-old Emmitt LaPoint has secretly been writing letters to his hockey idol, John LeClair, for years. So it’s probably only fitting that Emmitt’s small Vermont town seems desperate to make him the next LeClair. After all, Emmitt is about to lead his high school hockey team to the state championship, he has a near-perfect GPA, and he’s liked by almost everyone.

But even golden boys have problems, and Emmitt has more than his share. His father’s back in town to breathe down his neck. He’s happily dating his coach’s nephew, Dusty, but almost nobody knows he’s gay—and that secret is getting harder and harder to keep.

When Emmitt discovers Dusty is keeping secrets of his own, he’s forced to decide exactly what kind of golden boy he wants to be.

Probably the best sports romance I’ve read. There was so much meaning back into this, guys. Check out my review/blog tour post, and go read it. I cannot push talk about this book enough guys. Seriously.

Nature is out of balance in the human world. The sun hasn’t shone in years, and crops are failing. Worse yet, strange and hostile creatures have begun to appear. The people’s survival hangs in the balance.

To solve the crisis, the oracle stones are cast, and Kaede and Taisin, two seventeen-year-old girls, are picked to go on a dangerous and unheard-of journey to Tanlili, the city of the Fairy Queen. Taisin is a sage, thrumming with magic, and Kaede is of the earth, without a speck of the otherworldly. And yet the two girls’ destinies are drawn together during the mission. As members of their party succumb to unearthly attacks and fairy tricks, the two come to rely on each other and even begin to fall in love. But the Kingdom needs only one huntress to save it, and what it takes could tear Kaede and Taisin apart forever.

Malinda Lo is one of those authors that I keep hearing about, but never get around to reading. Chinese protags and lesbians? And fantasy?? Yes, please.

The Hate U Give by Angie Thomas

Inspired by the Black Lives Matter movement, Angie Thomas’s searing debut about an ordinary girl in extraordinary circumstances addresses issues of racism and police violence with intelligence, heart, and unflinching honesty. Soon to be a major motion picture from Fox 2000/Temple Hill Productions.

Sixteen-year-old Starr Carter moves between two worlds: the poor neighborhood where she lives and the fancy suburban prep school she attends. The uneasy balance between these worlds is shattered when Starr witnesses the fatal shooting of her childhood best friend Khalil at the hands of a police officer. Khalil was unarmed.

Soon afterward, his death is a national headline. Some are calling him a thug, maybe even a drug dealer and a gangbanger. Protesters are taking to the streets in Khalil’s name. Some cops and the local drug lord try to intimidate Starr and her family. What everyone wants to know is: what really went down that night? And the only person alive who can answer that is Starr.

But what Starr does—or does not—say could upend her community. It could also endanger her life.

Do I even need to explain this book. This book is important and I haven’t even read it. It important, and it’ll pack a punch.

One thought on “Diversity Spotlight Thursday #9”

Avery is a queer and disabled reviewer, writer, and public librarian. When they’re not reading, you can often find them playing on their switch, knitting or crocheting, or spending time with their geckos.

Please use neutral pronouns, such as they/them, when referring to Avery.

Interested in supporting this blog? Please consider donating a small amount and it will go towards maintaining this blog and keeping me afloat!